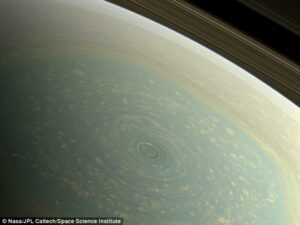 The strange hexagon cloud formation on Saturn’s north pole was first discovered in 1988, from data sent from the Voyager, but it was Cassini’s observations that confirmed the existence of this mysterious and unique cloud pattern.

The structure is about 32,000 kilometers (20,000 miles) wide and is believed to reach approximately 100 kilometers (60 miles) down into the gas giant’s atmosphere. Scientists have never seen anything like this before, and have been studying different models for years, trying to explain the physics behind this bizarre phenomenon.

As you can imagine, the internet is full of strange theories trying to explain the hexagon, ranging from an alien ship to a Stargate, considering the size of the hexagon (you could fit four Earths into it), that would be one hell of a spaceship. Researchers believe jet streams, similar to what we have on Earth, flowing at different heights and speeds, could cause this unusual formation. Research teams will be getting together to compare their different models and see if the findings hold.

Trump vs. Fiorina: The Three Questions We Should Be Asking