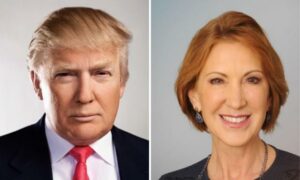 This is really a US election unlike any other.  Floating at the top of the Republican Ticket are three people that don’t have political backgrounds showcasing a near total lack of trust with the existing political system in that party.  I’m not convinced that same distrust doesn’t exist in the Democratic party suggesting one of these three could actually become President.  Of the three the two that have showcased management skills in line with an entity the size of the US Government are Donald Trump and Carley Fiorina.

The Three Questions we should be asking are whether they can do the job (realize that the last two presidents were largely unsuccessful in what they set out to do), whether they will do the job (defined as doing what is best for the nation as opposed to any special interest including their own), and whether they will survive the job (whether this is more than one term or being impeached).

Let’s talk about both candidates and these three questions.

Both Trump and Fiorina have run big organizations, Trump basically inherited his top position but has weathered an impressive number of storms and problems and has showcased a near uncanny capability to game systems for his own benefit.  Unlike anyone else currently running he has showcased a near super power level of capability in terms of overcoming, and often stomping to death, obstacles that are in his way.  Once he seems to set his mind on something anyone or any organization in his way has a high probability of becoming roadkill and this capability may make him the most competent, in terms of actually getting stuff done, of all of the contenders.

Fiorina worked her way up to CEO of HP from being a secretary.  She understands more deeply than Trump how things work in business but business is not government and her success against government is far smaller than Trump’s.   While her success up until HP was, particularly for a woman in a male industry, is inspirational her failure as a CEO against a largely dysfunctional HP board suggests she’ll have even bigger problems with an even more dysfunctional congress.  Still when it comes to things like actually using media rather than fighting it she leads.  In addition, in the personal deportment and debate she is nearly unmatched even by Trump so while Trump is clearly the more competent Fiorina could still be a force to be reckoned with and has braced Trump the most effectively.

But, in the end, Trump wins easily here.

Here both candidates have risks associated with them.  While Trump’s impressive history of gaming government systems is unmatched his history of focusing on anything other than what is good for Trump is almost non-existent.  Combining a capability that is unmatched in terms of accomplishing tasks with a history of self-service could actually be worse than not getting things done and there is an unreasonably high probability that we may not like at all what Trump does once in office.

Fiorina did have issues following the board’s direction at HP but it was a dysfunctional board so I think  we can give her a partial pass here.  When supporting McCain’s campaign she showcased that she could be a team player but when asked if McCain or Palin could run a company like HP she answered truthfully which got her kicked off the team.   I expect that was a learning moment for her but this experience showcased that while she is more likely to do the job than Trump; if there is a choice between toeing the party line and doing what she believes she may favor the latter.  Personally that is how I think the job should be done but many likely don’t agree with me.  Given Fiorina, as you would expect, has traditionally been a huge advocate for Woman’s issues, once in office, she will likely slide in that direction away from contrary party platforms (which most women and men likely are OK with).

So Fiorina gets the nod here with nearly as much of an advantage as Trump had on the first point.

Can They Keep The Job

Given Trump’s historical behavior the odds favoring him doing something that will get him successfully impeached are incredibly high.  A successful impeachment should not only stop much of what he is doing but undo much of what he had done.   If he doesn’t get impeached his skills at maintaining ratings for his TV show should work on assuring he gets reelected but being sent to prison would become clearly problematic to that outcome.

Fiorina won’t get impeached but her history at HP suggests she will either build a poor support team or lose interest in the job once she is elected.   Working against this is the fact there really isn’t a job up from US President which may hold her attention and she may have learned the “team” lesson because her election campaign team is executing particularly well.   But, as we saw with Obama and Bush Jr., great campaign teams don’t assure great Presidencies.

So Fiorina likely wins here but the risk that both of these candidates would fail to stay in office beyond one term is very high.

If you want change the rest of the Republican field is too entrenched in the existing process with the possible exception of Rubio.  Sanders looks and acts too much like the professor in Back to the Future to get elected, Clinton will likely perform like Obama did but will more aggressively dodge blame and then there is Biden.   Biden appears to have a change bug in his ear, actually has been VP so knows the turf, and is very well liked and might do it to honor his son which could be seen as noble.   On the democrats’ side he is the most likely not only get things done, but as a moderate, less likely to do things a whole lot of us will hate.  (For instance I’m a moderate Republican and he actually maps to my positions better than any of the Republicans do at the moment).  And while his ability to put his foot in his mouth has historically been a problem, Trump has made that kind of behavior into an asset suggesting this is Biden’s year.  Granted he actually has to run to get elected but, of all of the candidates, he looks the best on paper in all three of these areas.

Funny thing though is both Trump and Fiorina need someone that really understands politics to be their running mate (and likely their chief of staff).  If either put Biden in that role and he wasn’t neutered the resulting team could be impressively powerful.   It’s been a long time since we had a VP from the other party but maybe that is what is needed here.   Unfortunately neither Trump nor Fiorina are known for being able to work with a strong number 2 and neither even like to share credit.   But Fiorina might accept being VP under someone like Biden and that would be a fascinating combination that could both allow her to gain the skills she needed to be successful and better assure her spot as an eventual US President if she doesn’t age out in the process.

Something to noodle on this week.

The new Pebble is round