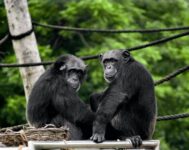 Researchers from Osnabrück University and the Max Planck Institute for Evolutionary Anthropology observed lethal chimpanzee attacks on gorillas in the wild for the first time on record.

The first attack resulted in one dead infant gorilla and three injured chimpanzees.

Researchers will begin to investigate the cause of the violence, but theories suggest that competition for food or possibly climate change could explain the violent encounters.

The authors also suggest that the collapse of fruit availability observed in other tropical forests as a result of climate change may have caused the attacks .

Chimpanzees’ lethal attacks on gorillas in the wild have been observed for the first time, a team of researchers has said.

Chimps caught killing gorillas in wild for first time ? and researchers have theories

Chimps are known to be hotheads ? but only within their own species, until now.

For monkey-eating chimps, the youngsters’ brains are the best part.

Intel Fixes Board Of Directors Positioning For A Brighter Future