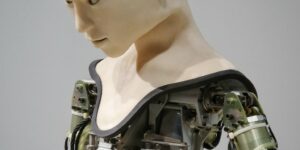 Elon Musk says Tesla is building a humanoid robot, and will probably have a prototype next year.

The robot will stand 5 feet 8 inches high, weigh 125 pounds, be able to carry 45 pounds and move as fast as 5 miles per hour.

It will use the same computer chip, no different than Tesla’s vehicles, and navigate with eight cameras, he said.

Musk did not say if it would be sold or for how much.

He said physical work would be a choice in the future, and a universal basic income would be needed for some people to have a job.

Elon Musk just added a robot to his list of things always coming ‘next year.’ For now he’s got a guy in a suit

Elon Musk said Thursday night at Tesla’s AI Day that the company is building a humanoid robot, and will probably have a prototype next year.

Rather than reading this article, I do highly recommend watching the video version instead. However, for those who do not like that medium, we have an article version of the video below. Not Autonomy Day 2.0 So, in regards to Elon Musk, I have often asked myself, ?Elon, you have the machine that builds the [?]

Tesla chief Elon Musk said the bots are designed for dangerous, repetitive, or boring work that people don’t like to do

The Power Of Trust: Why Pat Gelsinger’s Brand May Be More Important Than Intel’s