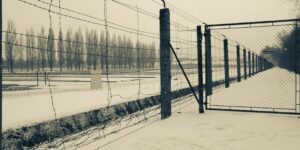 A 100-year-old former SS guard is accused of being an accessory to murder in 3,518 cases dating from his time as a guard at the Nazi concentration camp in Sachsenhausen.

He allegedly worked at the former concentration camp as a prison guard from 1942-1945.

More than 200,000 people were interned at the concentration camp, which is located on the outskirts of Berlin, between 1936 and 1945.

Despite his age, the centenarian has been deemed to stand trial in line with German privacy laws.

The court has scheduled a total of 22 trial dates, with hearings lasting up to two and two-and-a-half hours a day a day each week.

A former Nazi concentration camp guard was convicted of thousands of counts of being an accessory to murder and given a two-year suspended prison sentence Thursday, a court announced.

The woman is accused of having contributed as an 18-year-old to the murder of 11,412 people when she was a typist at the Stutthof concentration camp.

Review of Entre Institute (Jeff Lerner) – You Should Sign Up!