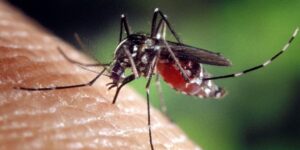 April 25th marks ‘World Malaria Day’; a recognition of global efforts to control the disease, and a commemoration of those who have been affected by it.

Malaria causes over one million deaths each year, according to UNICEF, and many more infections. However, it’s not all bad news. Eradication of the disease is possible; in fact, it’s been achieved in 62 nations since 1960. So, what’s getting in the way of a world free from malaria?

Malaria is a tropical disease that is spread by mosquito bites. Symptoms of infection include fever, sweats, chills, headache, vomiting and diarrhoea, and muscle pain. Severe and fatal malaria can present even more severe symptoms, and in extreme cases can be fatal.

It’s worth noting that not all mosquitoes carry malaria, and that it can also be contracted through blood transfusions and sharing needles, although this isn’t nearly as common.

What’s more, certain parts of the world are at greater risk than others, such as South Africa and Haiti.

How is it spread?

Only female mosquitos can carry malaria, and pass it to humans with the plasmodium parasite. When the host is infected with the parasite, it lays dormant in their liver for around two weeks before presenting symptoms as the parasite multiplies. However, this can sometimes be longer- even up to a year- so the infected person may not even know they have it.

Unsurprisingly, malaria is most prevalent in the developing world. A combination of the ‘ideal’ mosquito climate and low funds for prevention methods like mosquito nets and malaria infection education leaves many susceptible to the disease.

Can we eradicate malaria?

Despite the severity and scale of malaria, a world without the disease is possible, and may not be a difficult to achieve as one might think. In fact, infection rates are already on the decline. Methods for prevention and treatment do exist, and hold the potential to eradicate malaria across the globe.

Amassing the capital and resources in countries most at risk must be top priorities if we hope to achieve this aim.

This infographic, created by Work the World details exactly how we could achieve a world without malaria, in honour of World Malaria Day. Work the World organise healthcare electives across the developing world for both students and professionals.

How To Begin A Fishing Career?

Why You Need An Architect