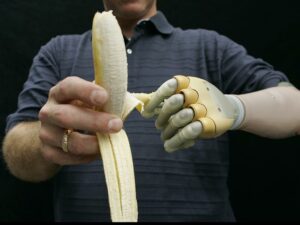 From 3D-printed prosthetics and revolutionary breakthroughs in fertility treatment to robot-assisted surgery, we take a look at some of the remarkable medical achievements of modern medicine.

While humans have been creating artificial limbs for centuries – most notably wooden and metal hands for knights and soldiers – it wasn’t until the arrival of carbon fiber that strong, lightweight, and realistic prostheses started to give physically handicapped people or amputees something closer to the real thing.

One of the biggest challenges of modern prosthetics, however, has been the time and cost involved in producing them. In the US, the cost of a prosthetic limb ranges from around $5,000-$50,000 – as each individual prosthetic needs to be custom-made to fit the wearer. In addition, they generally need to be replaced every 5 years – putting them out of reach for many – not to mention amputee victims in the developing world.

It seems that the 3D printing revolution may be coming to the rescue – especially in the case of children, who quickly outgrow a typical prosthetic. Anyone who owns a 3D printer can now download, customize and ‘print’ a prosthetic hand thanks to organizations such as The Enable Community Foundation from just $50.

Looking to the future, myoelectric sensors, which allow the wearer to control the artificial limb with their own brain impulses; and pressure sensors which send feedback to the brain to emulate the sense of touch, mean we’re getting ever closer to truly ‘bionic’ limbs.

Although access to the pill took some fighting for, it’s arguably been the single biggest driving factor behind the advancement of women’s rights and their entry into the workplace on a large scale. In the past, unwanted pregnancies could put an end to a woman’s career, or worse, drive her to seek an unsafe illegal abortion, often with disastrous results. It’s not often that medical innovations have such a sweeping social impact.

At the other end of the spectrum, advances in fertility treatment have given hope to couples desperate for a child of their own. Huge advancements in the fields of IVF, artificial insemination, and the arrival of micro-needles and advanced equipment that allows embryologists to perform procedures such as ICSI (Intra-Cytoplasmic Sperm Injection) have seen the chances of a successful pregnancy increase dramatically over the past few years. In addition, many clinics such as Wijnland Fertility have adopted a more holistic style of treatment – which includes psychological support for couples during this immensely stressful period.

It’s hard for any of us to even begin to imagine the psychological suffering associated with a disfiguring accident – over and above the physical pain of injuries. Advances in the field of reconstructive and plastic surgery have given thousands of people the world over the chance to return to a more normal life. Because surgeons can now suture and connect veins and arteries as small as a millimeter in diameter, it’s become possible to transfer skin and tissue from another part of the body and reconnect blood flow with minimal scarring.

And while the first full face transplant was performed in 2005, with 40 of the procedures performed around the world since then, it was only in 2018 that a man suffering from a genetic condition which causes disfiguring tumors survived a second face transplant. Contracture surgery for burn survivors, breast reconstruction after a mastectomy, and cleft lip and palate surgery have all likewise seen remarkable advancements in the past decade alone.

Eradicated entirely in the 1980s thanks to a global immunization campaign led by the World Health Organization, it’s all too easy to forget that the smallpox virus was responsible for the death of over 300 million people in the 20th century.

Polio, which mainly affects babies and children under the age of 5 – frequently resulting in irreversible paralysis of the legs and even death in 5 to 10% of cases – is now 99% eradicated thanks to the power of vaccines. It only persists in the poorest regions of the world and is but a distant memory in developed nations.

Today, it’s possible for patients to have access to the very best surgeons in the world – even if they happen to be on another continent at the time. The first complete transatlantic surgery was performed thanks to remote-control robots and video-conferencing in 2001 – with the surgeons in the USA and the patient in France.

Robot-assisted surgery is another growing trend, particularly useful in minimally invasive procedures where surgeons may battle to reach the site with traditional tools. Because they eliminate the risk of hand tremor, they can help to make delicate procedures such as neck and heart surgery safer.