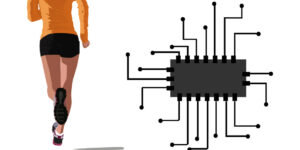 Over the past decade, the sport of competitive running – and marathon running in particular – has enjoyed explosive growth in the United States. As the sport has continued to increase in popularity, we’ve seen a number of leading tech companies get involved. As a result, we now have a myriad of running technologies on the market. But is too much technology a bad thing?

Over the past few decades, the sport of running – and marathon running in particular – has undergone tremendous growth. According to data from Running USA, fewer than 5 million people ran in marathons in the US in 1990. Last year, that number ballooned to more than 17 million.

As marathon running participation numbers have skyrocketed, so has the investment in running apparel, equipment, and technology. Everyone from well-known athletic apparel brands like Nike to newer tech startups like Stryd have gotten involved. But the question remains whether too much technology is a bad thing for runners.

If you wanted, you could run a marathon with 15 different gadgets and tools attached to your body. That’s how many different products there are on the market. The issue is that some of these technologies are valuable and others are useless. The key is finding a balance so that you don’t get weighed down (quite literally).

Here are some tips to help you do this:

One of the biggest problems with the running technology craze is that marathon runners suddenly feel empowered enough to make their own health decisions. This is dangerous and can potentially have a negative impact on your ability to run in the future.

“Regardless of how long you’ve been exercising, there are certain warning signs and risk factors that should be evaluated before beginning a new workout program — especially one as intensive as marathon training,” says Dr. Kousik Krishnan, an electrophysiologist and veteran marathon runner.

While things like wearable devices are great, you can’t just review numbers on a watch and then make important health decisions based on the data. You need to seek out professional medical opinions and ensure you’re healthy enough to carry out a particular training regimen.

2. Listen to Your Own Body

This may sound like common sense advice, but it’s amazing how much we second-guess ourselves. If there’s ever a conflict between something a piece of running technology is telling you and something your body is telling you, listen to your body! You are a much better judge of your health.

3. Use Tools That Aid Health and Performance

You can purchase just about any type of running technology you want. There are tools designed to keep you focused, engaged, energized, and everything in between. And while there’s nothing wrong with these tools, you don’t need most of them. As a rule of thumb, only use tools that directly aid health and/or performance. This will prevent you from wasting time and money on gimmicky tools that you don’t actually need.

If you’re going to use running technology, make sure you aren’t just using it because it’s the “cool” thing to do. You should be using running technology in an effort to enhance your health and performance in tangible ways. With that being said, remember that running technology should never replace professional medical advice. Strike a balance and you’ll be happy and healthy.

What are the most fun cities in the world?