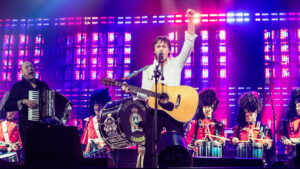 Speaking to BBC Radio 4’s Mastertapes, Sir Paul McCartney was surprisingly candid talking about his struggles after the Beatles broke up.

Talking to John Wilson he confessed

“I was depressed. You would be. You were breaking from your lifelong friends. So I took to the bevvies.”

“The business thing split us apart,”

Sir Paul also discussed his relationship with John Lennon and how it had improved in the months before the star’s tragic death in 1980.

“I would make calls to John occasionally,” he said. “We just talked kids and baking bread.”

“We never appeared to write a song. A lot of what we did was just telling each other stories.”

“People says he’s eccentric… which you’d have to agree with. He’s a monster. He’s a crazy guy that comes up with great stuff.”

Game of Thrones Spin-Off a rumor?