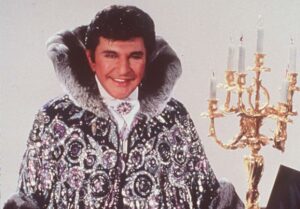 We’ve written before about rock and roll holograms, and it’s been in the news a lot since a hologram of Tupac appeared at the Coachella Music Festival. There have been a lot of legal questions raised about reusing somebody’s image like this, as well as the question of whether fans would even want to see an image of someone instead of the real thing.

Still, we’re sure there’s people out there that would be more than happy to see an Elvis hologram, or a hologram of the Beatles if all the legalities could be cleared up, so it’s funny to see that a hologram of Liberace, of all things, will apparently be touring the world soon.

Rolling Stone tells us this is going to be courtesy of Hologram USA, who have the cooperation of the Liberace Foundation. This report also tells us that there will be more hologram plans will be announced soon as well.

While a lot of artists would balk at this, something tells us Liberace would get a kick out of it. A lot of younger people probably had no idea who he was until the Michael Douglas movie, and would be amused to see a fully flamboyant Liberace brought back to life again. (And being such a showman and entertainer, who don’t think Liberace would be so artistically pure to be against being resurrected trough a hologram.)

What Movies Made the Library of Congress This Year