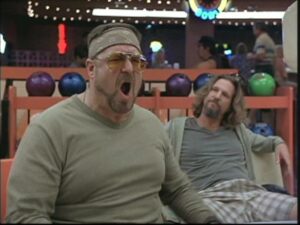 When your movie gets entered into the Library of Congress, it’s a big thing. It means your wok is being preserved forever, and is considered one of the most important works of cinema in history. And you don’t have to make stuffy, arty stuff to make it, John Carpenter’s Halloween is in there, and now so is The Big Lebowski, Ferris Bueller’s Day Off, Rosemary’s Baby, and Willy Wonka and the Chocolate Factory.

As Rolling Stone tells us, The Library of Congress said in a statement they liked the “highly quoted” themes of “alienation, inequality and class structure” in Lebowski, and for this writer especially, Bueller’s Day off is one of my all time favorite John Hughes flicks.

Rosemary’s Baby is certainly a landmark horror film, and while I wasn’t totally nuts about Willy Wonka the movie compared to the book, there’s no question it lives on as a beloved fan favorite. Also on the list this year are Saving Private Ryan, and Little Big Man.

And as far as Lebowski is concerned, it’s really remarkable how the cult of the Dude has grown after all these years. To some, it felt a bit of an uneven follow up after the Coen Brothers made the brilliant Fargo, but more stuff stuck to the wall than didn’t with Lebowski, and it’s one of those movies that clearly get better with time. Now that it’s in the Library of Congress, the Dude will abide for all time.

Xbox One Still the Top Console of the Season

Liberace Hologram May Tour the World