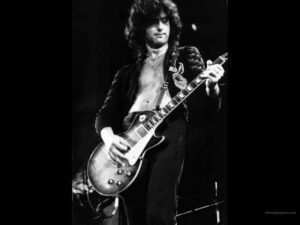 If the remaining members of Led Zeppelin ever decided to launch a reunion, they could certainly write their own check, but it’s very unlikely it will ever happen. In fact, Jimmy Page has said so himself, and is ready to move on with a new band.

Page has been open to a Zep reunion forever, but Robert Plant’s never wanted to do it. When Plant went on his solo tours, he wouldn’t do Zeppelin songs for years, which took enormous balls. He very easily could have riden on his past, but he insisted on doing new music, and making that his focus. (By the late eighties, Plant apparently felt comfortable enough with Zeppelin’s legacy and started performing some of their tunes again.)

As Page told Blabbermouth regarding a Zep reunion, “I don’t think it looks as thought hat’s a possibility or on the cards…All I can say is it doesn’t look likely.” Page has done his solo trips as well, and now it looks like he’s going to put together a new band and do new music.

Page said he’s going to put a new band together again next year, and he wants to play music spanning his whole career. “Live concerts are always an interesting challeng because it means you can always change things as you’re playing every night. You can make even more of an adventure.”