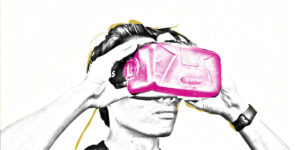 With the advent of the internet, players started to spend more time in Online Casinos than traditional land-based casinos. Though Online Casinos were able to offer a wide range of features and a larger collection of games when compared to traditional Casinos, It’s practically not possible to offer the same gameplay experience of a live Casino. But with advancements in virtual reality technology, online casinos will be able to provide a lot more interactive and immersive gameplay experience than before. Analysts have predicted that bets made through Virtual Reality Casinos could reach up to $520 billion by 2021 which is more than 800% surge.

Virtual reality refers to the computer-generated simulation of a 3D environment where users can participate and interact with the surroundings in a seemingly real way using special equipment like a VR-helmet or gloves fitted with sensors. Since the VR-helmet is both lightproof and soundproof, it gives you a completely natural feeling of interacting with the virtual world. Virtual casinos allow users to enjoy the real gaming experience like playing in a live casino.

Online Casinos have already made it possible for people to enjoy playing their favourite games in the comfort of their home without having to travel to a live Casino. With VR casinos coming into the picture, we can expect more players to enjoy the casino games as it will attract a lot of first-timers. Oculus Rift is one of the popular VR headsets which are used for casino games like Roulette and Slots. By wearing this VR headset, players can spin the wheel themselves and experience watching the ball spinning around the wheel as if they are playing it in a live casino. NetEnt, the popular Gaming software provider that has launched a series of VR slots games in 2016.

With a lot of advancements in both VR hardware and software, Virtual reality casinos are growing beyond mere pseudo-3D interfaces and allowing allows players to immerse onto the live casino floor. Many VR headsets have been introduced in the market during the last few years like Oculus Rift, HTC Vive Samsung Gear, Google Daydream and PlayStation VR etc. With help of a VR headset and compatible VR powered iGaming platform, players can enjoy the gaming experience of an interactive casino and also engage with other players in real-time.

Players can witness 3D game tables and detailed casino rooms in which they can walk-through and interact with other players in fully-immersive 3D. Using VR technology, players can sit in the Casino lounge and interact with other players or even stop off at a casino bar to have a drink. VR casinos also offer the ability to display hand and body gestures and also witness the gestures of other players on the Casino floor. Players can also enjoy in-game conversations and witness realistic surround sounds similar to that of a live casino along with a 3D spatial aspect.

Casino VR Poker is another VR casino that was developed exclusively for Texas Hold’em Poker in Switzerland. It features detailed Casino rooms with realistic players and spatial voice chatting experience. It is a cross-platform compatible VR which works both on Gear VR and Oculus Rift.

Slot games are one of first Casino games that became popular in VR Casinos and Slotsmillion was one of the first virtual casinos that was developed by LuckyVR and got launched in 2016. This VR casino is based on Oculus Rift VR technology and is focused only on the slot games. They have more than 40+ slot machines and the game rooms are very much similar to a real casino.

Slots have been the preferred game for VR experimentation by major gaming companies like PlayTech and Microgaming since it’s easier to implement. VR platform developers are trying to build a more immersive and lifelike experience and this will definitely attract a lot of new players to the online gambling market. There are several free spins no deposit casinos for mobile which are irresistible for first timers who want to try their luck in slot games.

Virtual Reality in casino industry is still in its infancy with only a few casinos that have implemented this technology and a very limited game choice. Many land-based casinos in the US have already started investing in VR gaming platforms that players can try out inside their premises. It’s estimated that online casino industry will generate revenue of $2.85 billion by 2020 and with VR technology we can expect this to increase further. We can witness a lot of online casinos adopting VR technology in the coming years to enrich the gameplay experience of their users.

The Positives Of Dental Implants