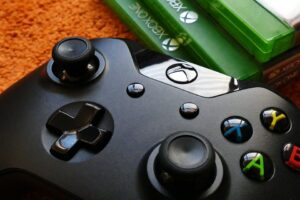 2016 was undoubtedly one of the best years in gaming. Pokémon Go showed us just how far augmented reality had come, the virtual reality space was filled with a good number of new, VR-capable devices, and the console war was taken to the next level with new devices from PlayStation, Xbox, and Nintendo.

The gaming community is always hungry for new gadgets and tech, which is why 2017 will be no different in terms of new gaming gadgetry. And even though the year is still young, the 2017 edition of CES gave us a glimpse of what to expect over the next few months.

Check out some of the gear that every gamer should add to their gaming arsenal this year.

This Acer monitor turned heads during this year’s CES chiefly because it provided a glimpse into the future of gaming. The Predator Z301CT features a curved, 2560 x 1080-pixel display with Tobii eye tracking that enables the monitor to adjust the intensity of graphics depending on where the player is looking. It also comes with Nvidia’s new G-Sync technology that helps to reduce input lag during gameplay.

Like many things Sony, these headphones come with next-level hardware capabilities that will even let you count footsteps on a stealth mission in Hitman. Check out this review from Psyrox for the ultimate headphones review.

The Z is the most advanced gaming mouse you’ll probably ever come across. So otherworldly is this mouse that it won two Innovation Awards at the 2015 edition of CES before its final design was completed. The Z features a gyroscope, accelerometer, tactile feedback, and a force sensor that give the user the ability to tilt, pivot, and roll without the keyboard. It also features additional button functions that will let you reload, crouch, or lean without pressing any keys on your keyboard.

If you love gaming on the go, the PhoneJoy Bluetooth Controller will let you turn your Android smartphone into a mobile gaming center. This device comes complete with a D-pad, four action buttons, four shoulder buttons, and two thumb sticks (analog) that almost feel like the controls on a PlayStation gamepad. You simply fit your smartphone into the controller’s frame, link them up via Bluetooth, and enjoy any game on the go.

The Nvidia Shield is a disruptive piece of technology that shows just how cool gaming on tablets can be. The Shield features a Tegra K1 SoC with a 2.2GHz quad-core processor and a Kepler GPU for some of the smoothest graphics on a mobile device. The 8-inch display features 1080p screen resolution for HD graphics and is surrounded by two high-quality speakers for clear audio.

The GAEMS M155 is a 15.5-inch HD monitor that is perfect for gaming on the go. It can be easily used with your regular PlayStation, Nintendo, or Xbox console via a USB cable, which means you don’t have to carry your bulky TV with you every time you want to power up your console away from home.

Plus, at just under two pounds, the GAEMS M155 monitor is easy to carry and fits comfortably in a backpack.

The Razer Raiju gaming controller is one of two pro controllers that were licensed for design by Sony for the PS4 towards the end of 2016. The Raiju was specifically designed for professional sports tournaments on the PlayStation network. It adds a number of key features to the basic PS4 controller, including extra bumpers and detachable triggers, detachable rubber caps on the analog sticks for extra grip, two custom player profiles that users can switch between on-the-fly, and a useful control panel that’s been built-in to the front of the gamepad.

Of course, not many of us can get all these gadgets at the same time. But if you are one of the lucky ones who can, don’t forget to leave some room for the tons of gadgets that are set for release later in the year.

The evolution of the mobile phone.