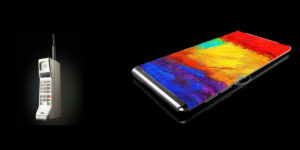 The evolution of the mobile phone.

As mobile phones become more sophisticated and readily available, technological advances continue to make them more lightweight and powerful, with better battery life and connectivity. The first true mobile phone made its appearance in 1973, a 1kg Motorola with 30 minutes of talk time and a ten hour recharge period. Now, the latest mobile phones boast hundreds of features that would have been considered to be from the realms of science fiction in 1973. The latest models boast hours of battery life and even processors, RAM and solid-state storage. The last 20 years in particular have seen the biggest innovations.

The most noticeable difference from early models is the screen. Old mobiles would often have a small LCD with limited pixels and maybe a back light if you were lucky. Now, high-definition touchscreens that make up around 90% of the front of the phone. The huge, plastic ‘bricks’ that were common began to be replaced in the late 1990s, with ever smaller phones being released. However, this trend in shrinking phones took a different direction as demand for larger screens increased and now the focus is on making devices thinner and lighter. The flip-phone was an innovative and popular product in the 2000s. Flicking open your Motorola Razr V3 seemed very futuristic at the time, but again the demand for quality screens took precedent over gimmicky design features.

As the demand for mobiles with more features rocketed in the early 2000s, giants like Nokia and Ericsson lead the way in technological advancements. The introduction of Bluetooth in the mid-90s allowed data transfer between devices over short distances and a few years later millions were sharing photos, documents and even songs between their phones; with the advent of MP3, it made sense to consolidate devices and the mobile phone was the ideal candidate to begin replacing the MP3 player and eventually iPod.

One of the biggest advances in mobile phone technology was the addition of a digital camera. The J-Phone, released in 2000, was the first true camera phone and by 2005, almost half of all phones on the market had a camera installed as standard. Nokia became the world’s most sold digital camera brand around the same time.

A decade later, the world of mobile internet was really beginning to take off. The first generation iPhone model wasn’t the first to offer 3G internet connectivity, but it made huge steps in bringing mobile web browsing to the masses. Now, we are in the age of 4G and on the brink of 5G ultra-fast connectivity. Apple also kicked off an operating system rivalry, with the rigid, sleek iOS going up against the more accessible, user friendly Android OS. Applications like Facebook Messenger, Whatsapp and Skype now allow instant messages, calls and even video calls to be made from your phone over the internet. We have virtual personal assistants like Siri and smart technologies like thumb print security and facial recognition. The phones in our pockets couldn’t be further removed from the Motorola model conceived in 1973.

The mobile phone has become more than just a phone. They are a camera, a personal computer, a satellite navigation device and interestingly a games console. Aside from the hundreds of apps that allow you to play an incredible variety of games, you can also game online. Online gambling is immensely popular, with gamers taking advantage of a capability of accepting different forms of payment methods and unprecedented connectivity to play anytime, anywhere. Phones now support anything from simple 2d casino games to fully immersive 3D experiences.

It will be interesting to see how mobile phones continue to develop and what sort of technological innovations will continue to grab our interest and make our lives easier. It is a certainty however that gaming will continue to be a key feature of future phones and the demand will only lead to a better experience for players.