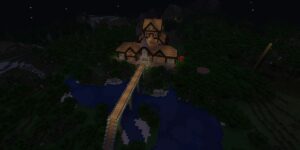 NVIDIA announced that Minecraft had been updated (in Beta) to take advantage of Ray Tracing this week, and most of the analysts wanted to know why? Minecraft is not exactly a type of game that you would think would benefit from a GPU, let alone the most advanced of NVIDIA’s technology offerings. But, surprisingly, Rat Tracing not only helps, but it also helps a lot, (you can see the impact in this video), and I think, this points the way to a future for Minecraft where the game moves from being the low tech blocky thing it is into something far more interesting.  A photorealistic world simulator.

Minecraft is an addictive game where players can easily build exciting and somewhat complex worlds to explore and play with. Think of it kind of like an easy architectural Computer-Aided Design program with a relatively short learning curve and a vast number of other players working to figure out more interesting, creative, and fun things to do with it.

One of the more interesting is an effort to create virtual earth in Minecraft, which has captured the interest of the Minecraft gaming community and may result in the most massive crowd-sourced attempt of its type in history. It will take substantially more than six days to recreate the earth in Minecraft.

Now you typically end up with a blocky image of what you built in Minecraft, which is not extremely attractive. But when you apply, Ray Tracing technology suddenly light and shadow start making the Minecraft environment look more realistic, more interesting, and certainly more compelling.

Sadly, unless someone exploring the world you have created also has one of NVIDIA’s RTX solutions, they won’t see the improved lighting, textures, and graphics. Still, at least you will, and as other Ray Tracing products come to market, your efforts will become more visible to others.

But I think this is only the start.

One of the features we do not talk about enough with NVIDIA’s implementation is that it can also be used to shift images (games, videos, and photos) to higher resolutions. This technology is creating the potential for taking a Minecraft Map and upscaling it to make it photorealistic.  Tied with an AI to fill in the upscaling blanks at some point in the future, you should be able to take your completed blocky Minecraft map and upscale it to make the buildings and people more realistic once you’ve finished creating them.

Now imagine that at some future point being able to take your completed Minecraft map and have it turned into a more realistic (non-blocky environment) and eventually become photorealist so you end up with what appears to be a picture of a real place.

Once that Minecraft representation of the world progresses to a point where they have completed cities, I can imagine that other game makers might license the map allowing you to play future games in the town you live in, lived in, or want to visit eventually.

I think it would be a ton of fun to have a Zombie battle, for instance, in a virtual copy of your neighborhood, or to work off frustrations during this COVID-19 event sitting up on your virtual house, and picking off NPCs (non-player characters) that aren’t wearing masks.   I would buy that game.

Wrapping Up: Moving From Blocks To Reality

While this initial step with NVIDIA’s RTX cards and Ray Tracing is exciting and does allow for a far more realistic and certainly more attractive Minecraft result, it is the evolution of this technology that interests me. If you can take a simple world-building tool like Minecraft and up-convert the result to a photorealistic image, it would open the door for a lot of people to help build out massive virtual worlds we could all play in.  Think of Edger Rice Burroughs steampunk Mars or Venus, chasing Godzilla through the actual streets of Tokyo.

Given most of us are locked up at home now, just the idea of a photorealistic world we could explore gets me excited I just wish that capability were here now and not off into the future.  In the meantime, you can get a sense of where this is going if you have Minecraft and an RTX card.