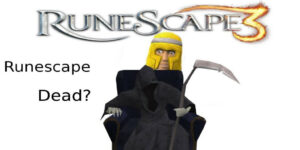 Runescape was the first massively multiplayer online role-playing game. It was established in 2001 by Jagex studios who went further publishing it. Runescape takes place in a mythological fantasy territory divided into cities, kingdoms, and regions. It has no direct story, players are able to experience their own escapades by trading and killing monsters.

As per its number of years of existence, when one learns that am still playing Runescape, I usually get to be asked: “I think Runescape is dead?” Really Runescape is not dead! The game has become faster and easy to play due to its improved graphics. For new players, one has to only sign up and log in to enjoy the free content.

This is the most asked question when it comes to Runescape. I have come to understand that many massively multiplayer online games do not survive for a long time. But for Runescape, it has gone past this myth. Back in 2012 when it listed its 200th millionth account, the number of people playing Runescape dropped but a massive number of its core players are still playing.

The number of players on Runescape is not enough to make Runescape hit headlines but are more than enough for the game to be alive.

The difference between Old and New Runescape Versions

After years of existence, Runescape has transformed in many ways. Comparing the Runescape experience before 2012 and after is more significant. In 2012 the developer updated the “Evolution of Combat”. Which has brought change in the way the game is played.

I know many players who have not played the game for more than 8 years I know you expect that the graphics have changed. That’s not the case graphics are still the same but the game is more enjoyable as it was when you last played.

Is Runescape worth Playing?

Many online game players are still undecided on whether Runescape is worth their time. I would like to encourage these players that Runescape is still the best massively multiplayer online role-playing game. Currently, it’s clear that Runescape cannot compete with MMORPGs such as Final Fantasy XIV.

But remember Runescape is a browser-based game hence when distinguishing it with other browser built MMOs I think is among the best. Other games like Drakensang Online and Knight’s Fable major on combat, Runescape has both warfare and the metric ton of skills, events, and missions.

The loyal Runescape players know the secret behind Runescape, hence cannot stop playing Runescape. This is because there are more than 203 missions, over 30 activities, and 26 skills. Also, Runescape has three warfare styles that include;

Hence if you are a lively Runescape player you will never run out of things to do.

After it was established in 2001 playing Runescape was free to play. But in 2002 a paid membership plan was formed. For a number of years, Runescape derived income from monthly subscriptions. Years later “Squeal of Fortune” was introduced, this entirely changed the games view.

This evolution was great in its way for one can convert real life money to in-game items and more especially gold. This radical development led the creation of gold shops where players buy game gold with real money. There are a variety of shops that sell gold, this is if you want to win. They include;

These but a few but the highly trusted shops if you legitimately want to pay for a win in Runescape. Clearly, Runescape is a pay to win the game. Nonetheless for some like me who have played the game for over ten years and have not mastered the necessary skills on how to win. But for you, I know you have the correct skills to win, this after buying enough gold.

There is a fallacy that, “if you win in Runescape you lose in real life”. I find this funny rather than true, this is only but a game it does not define your future.

Actually, you should try it out, I believe you will have an affection for it.

Really 2018? Many people ask themselves whenever one is playing Runescape. I strongly encourage you to play Runescape this year, due to the updates it has for example:

Clearly, Runescape is not dead and cannot die anytime soon.

How to run a criminal record check online

A New Email Analytics App For Gmail Has Just Launched