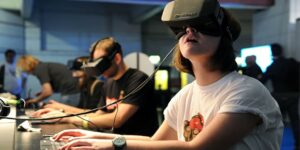 As gaming technology continues to evolve rapidly, it is hard to keep track of every little change that is brought into the mix on a regular basis now, but there have been a few profound changes in gaming that shifted and changed things up quite significantly in the recent years. Next, we are going to talk about a few of those changes that affected and changed the lives of gamers forever.

Rise of the Smartphone Gaming

As of now, mobile gaming is dominating the global market by accounting for more than half the total revenues generated by the gaming business. There are multiple ways in which this has changed gaming forever and some of them are as follows:

Online casinos made it safer and infinitely more convenient for players by making the casino experience available from the comfort of their own home, but mobile gaming took it a step further. Portability reached new heights as gamers were now able to access their favourite online casino from not just a cybercafé or their home, but quite literally from anywhere in the world and even while traveling.

As hardcore gamers know, there is no smartphone in existence at the moment that can truly replicate the quality of games on modern consoles and PCs. However, what smartphones did was make gaming accessible to anyone and everyone, irrespective of their age, gender or interests. Everyone already has a smartphone and if they can use it to play a few games, there’s no reason not to.

The Rise of the Freemium Model

You can download most smartphone games for free these days, but after a while you will be pushed to buy things in-game with real money and that’s probably the worst aspect of mobile gaming. The freemium model works by letting people have a taste of the game and then charging them perpetually for in-game items, as opposed to a one-time payment system which still exists on dedicated gaming platforms.

There was a time when Nvidia and AMD used to roll out new GPUs every year and even flagship graphics cards got old and incapable of running new games at high settings in just a year or so. Those days are truly gone now as the nearly two-and-a-half-year-old mid-ranger GTX 1060 is still perfectly capable of running almost all modern games on high settings at 60fps, as long as you are happy with 1080p resolution (which is still the standard for gaming). The recently released RTX 20xx series by Nvidia is a big improvement of course, but it doesn’t make the last gen cards obsolete by any means.

AR and VR in Gaming

Both augmented reality and virtual reality failed to create as much of an impact that they were expected to and that is true in case of gaming as well. Nevertheless, the very fact that people could wear headsets and literally enter an interactable video game world is nothing short of jaw dropping if you think about it! The AR title Pokémon Go won the world over in 2016, but no other VR title impressed and scared players more than Resident Evil 7. While there’s still a huge room for improvement, there is little doubt that AR and VR gaming has already changed the very perception of gamers.

Something that didn’t make it onto the list but definitely deserves a mention is how developers have turned gaming into a social experience everywhere. Whether you are playing an action RPG like Path of Exile or a competitive multiplayer shooter like PUBG, gaming has now become a social activity. While classic gamers who love the term “single-player” do not appreciate this shift as much, social integration is an almost inevitable part of gaming today.