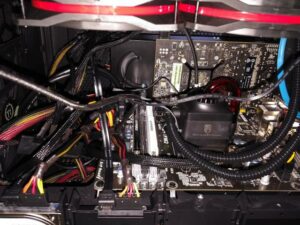 I’ve been running the Radeon RX 480 graphics card which AMD launched under the “Radeon Rebellion” campaign and I have to say I’m impressed.  Not only does this card fit in the size and power envelope for a Mini-ATI case build but it is playing games better than my aging NVIDIA GTX 680 card at the moment and it is only a $200 part in 4GB trim and it costs 20% more $239) for 8GB a relatively easy upgrade decision.

AMD, rather than focusing on the high end of the market with this part and line, decided to go after the space where more of us live.  While there clearly is a market for builds that cost over $2K (I have several myself) the vast majority of the untapped market is far closer to $500 than $2K and this is the market that AMD wants.

Right now it really doesn’t make sense to spend a huge amount on VR because most of it will change over the two years.   Headsets, like the HTC Vive (which I have), will set you back nearly $800 and this is on top of the system changes you need to make to support them.  The RX 480 provides a relatively inexpensive way to upgrade your existing system to support VR or to build a VR ready box.   The one I built with this card using a mid-range AMD Athlon 4 core processor, fast DDR3 memory, a 500GB SSD drive, and water cooling in a mini-ATI configuration was about $800 including the RX 480 card.   But it is a decent, reasonably good looking, small build.   I could have actually gone smaller thanks to the small card size of the RX 480 but I already had the case.

By the way if you haven’t shopped SSD drives recently they have come way down in price.  A 480 GB Samsung drive was surprisingly close to $130 on Amazon.

In effect with this build I can get both the VR headset and a new PC for what a strong gaming system would have typically cost me to set up.

I typically run my systems at 3440 x 1440 resolution on a 32” Dell curved or LG flat screen with details cranked up because I really like the visuals.  My new game of choice is Ashes of the Singularity which is currently kicking my butt on one of the extended levels.   This game takes my old gaming system to its knees with frame rates so low that the game is unplayable.   But the RX 480 system even with the graphics cranked up looks great and while I initially had some odd behavior, the latest driver updates fixed it, and the system is working impressively well.

The improvements in latency, image quality, and performance from the older high end system I was using is night and day stunning and I can’t get over how inexpensive this card is.

I can flip from catching up on work to playing the game and back again.   By the way I’ve moved to entirely water cooling on all my systems.   The lack of fan noise is a huge improvement and you can get some pretty nice self-contained systems for around $100 and they are damned easy to install thanks to the newer cases which allow access to the back of the motherboard without having to remove it.

I have a nasty habit of mounting the motherboard before reading the fan mounting instructions and really hate having to take the board out to redo the fan mount.   These latest cases fix that (but always look for that hole under the processor).

As for specs this is a new card so it supports HDMI2.0b, DisplayPort 1.4 HDR and AMD FreeSync (which eliminates tearing if you have a compliant monitor, I have two), it will support single cable 5K monitors (which cost an arm and a leg at the moment), and is tuned to make applications like Skype work better.

AMD has improved their graphic card control application which allows far more adjustments and a far quicker out of box experience.   If you are into overclocking the software allows you to do it relatively quickly and safely.  (I didn’t overclock as I don’t like the higher risk of crashing and losing all the progress I’ve made.   This is one of the first cards to support the new Vulkan gaming API which massively improves graphics efficiency and performance.

This card is based on AMD’s latest architecture called Polaris and it kicks butt.

One of the things I like to do over the summer when it is really too warm to work on my cars is to do system builds.   I’ve built two in the last two weeks and it just amazes me how easy this has become.  One of the systems is my first custom water cooled build where I cut my own tubes and hoses and build from water cooling components rather than using a pre-assembled solution.   While I did learn that there is a lot of variability in tube and hose sizes and that if you don’t match up the parts well you’ll bleed coolant these builds have gone from taking a couple days to taking a few hours and I’m spending most of my time on stuff that is more appearance than function.   The OS load with Windows 10 is so much easier than it used to be that what used to take me a couple of days now just takes a few hours.   The small AMD system took me around 90 minutes and that includes loading the software, account setup, and initial tuning.

The AMD RX480 makes for an easy build, an impressive amount of performance for the money, and, to date, an impressive gaming experience.   And it fully supports my new HTC VR rig, that’s a lot for a card that costs under $250.  This is one of the most impressive efforts this market has ever seen.