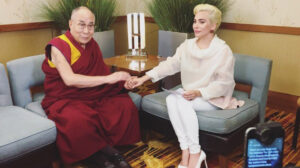 China on Tuesday said US pop star Lady Gaga’s meeting with exiled Tibetan spiritual leader the Dalai Lama had unleashed “anger” in the country, as internet users criticised her for meeting a man China condemns as a separatist.

The barrage of angry and critical comments came after the singer posted several photos of herself with the Dalai Lama on Sunday at the US Conference of Mayors in the city of Indianapolis on her Twitter and Instagram accounts.

Lady Gaga chatted with the Dalai Lama on topics including generosity to the poor and mental health.

China considers the Dalai Lama, who fled Tibet into exile in India in 1959 after a failed uprising against Chinese rule, to be dangerously “splittist”, or separatist. The Dalai Lama says he only wants genuine autonomy for his remote homeland.

After the relevant incident happened, if you look at comments on the Chinese Internet, their anger has welled up.

Lady Gaga has not remarked on the backlash from Chinese internet users on her social media accounts. She is popular with the Chinese youth but has never held a concert in mainland China, though she has in the Chinese territories of Hong Kong and Macau.

Such meetings with the Dalai Lama often mean that foreign artists are blacklisted in China.

Also read: Dalai Lama, Lady Gaga Come Together to Spread the Message of PeaceLady Gaga Has a ‘Kindness’ Date With the Dalai Lama