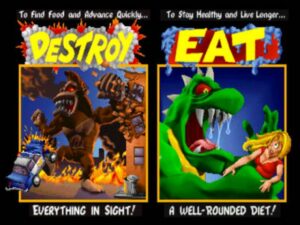 Thanks to San Andreas, The Rock is the hottest action star in Hollywood, and he’s not only got a remake of Big Trouble in Little China lined up, but he’s also going to star in the movie adaptation of Rampage.

As the Hollywood Reporter tells us, the team that gave us San Andreas will be making Rampage, mainly producer Beau Flynn and studio New Line. Ryan Engle who wrote the action thriller Non-Stop is working on the script, with the studio hoping for a 2016 start date.

With Rampage, it looks like The Rock might be going for Pacific Rim territory, because in that game, big monsters have to fight off attacks from the military, and the game is done when the city is completely wrecked. Sounds like fun, right?

We’re still hoping that video game movies will have a big turn around soon, and perhaps Rampage is going into production because Hollywood’s hoping for the same. With superheroes starting to cool off, we’ve been predicting for a while that video game movies could be the next big thing if there’s a big blockbuster that can turn things around. (Personally we’re hoping for World of Warcraft, which is coming next year.)

We’re not sure how adaptable Rampage could be, and by the time it’s made, it may end up competing with the next Pacific Rim movie, and two giant monster movies competing with each other could be confusing to audiences, but we’re definitely curious to see what the Rock’s got cookin,’ and we’d much rather see something like this than a Big Trouble remake any day.