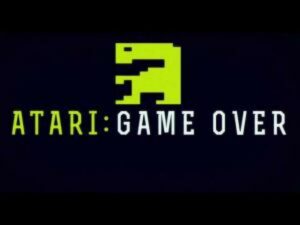 It was the fasted growing company in American history, and every year they made millions and millions more in profit. Then, seemingly overnight, it all went down the toilet. How? Why?

Well, the short answer to why Atari went out of business is E.T. the game. It may not have single-handedly put the gaming giant in the toilet, but it sure did enough damage that the company never recovered. And now you can watch the whole sordid story in Atari: Game Over, which is an original documentary you can watch on Xbox and XboxVideo.com.

Zak Penn, who wrote several superhero movies, as well as the legendary bomb Last Action Hero, so he knows how tough it is to create a legendary disaster. He even made the pilgrimage to the giant landfill where millions of E.T. games were dumped.

We’re looking forward to checking out Game Over to see what we can possibly learn from the sins of Atari’s past. The failure of the E.T. game precipitated the collapse of the entire gaming industry, and while gaming is currently going very strong, we wonder if another game like E.T. could set the dominoes tumbling again.