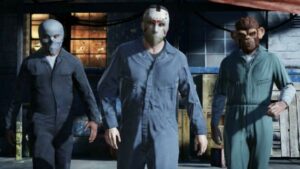 After some delays, the new GTA game, GTA 5 Heists, is coming on March 10. Or we should say the PC version of the game won’t be ready until April.

As Cinema Blend reports, Rockstar Games posted for the fans, “We know it’s been a wait, and appreciate your patience. Heists will bring a brand new 4-player cooperative gameplay experience to GTA Online, giving players the chance to team up to pull off a string of intense, multi-part raids and robberies across Los Santos and Baline County.”

The PC edition of the game is now coming on April 14, with Rockstar further saying in a statement, “Our apologizes to PC gamers worldwide who have been counting down the days until the launch of the game, but a bit more time is needed to ensure that the game is as polished as possible.”

As Cinema Blend reminds us, the game was supposed to be ready back in November, then January. And as iDigitial Times reports, the heists in this game could include a casino, a prisoner bus, as well as the most obvious place to hit, a bank.