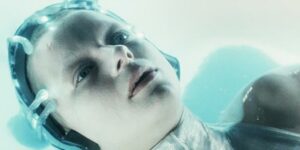 We’re all going nuts at TG about all the great genre TV that’s been going on for years, including Game of Thrones, The Walking Dead, and more. Now along with Twelve Monkeys and Westworld, Minority Report is coming to TV as well.

Minority Report is going to be a Fox series, and casting is quickly coming together. As Deadline tells us, the series takes place ten years after Precrime comes to an end. Three Precogs are trying to live a normal life, but one of them keeps getting premonitions of the future.

The character of Agatha, who you may recall was played by Samantha Morton in the movie, is being played by Lara Regan, who starred in the movie version of Atlas Shrugged.

According to Uproxx, production on the show is about to begin, and the site feels it’s going to be “one of the hottest pilots of the 2015/2016 season,” which means it should be on TV by the fall, although ‘Roxx writes, “it remains unknown how many episodes the first season would include, or whether it’d be a fall or mid-season series.”

GTA V Heists Finally to Arrive After a Wait

Next Ghostbusters Drawing Inspiration From The Walking Dead