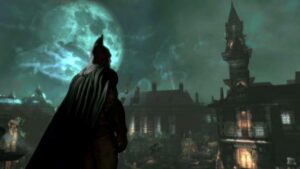 Although it will never happen, the idea of a Batman movie getting an R rating is an intriguing one. The character’s already pretty dark, but it’s a trip to think what could be done if a filmmaker let it go really, really dark.

Now reports are coming in that the latest Batman video game, Batman: Arkham Asylum, has been given an M rating “with Blood, Language, Suggestive Themes, Violence.”

In this game, Batman has to fight the Rogues Gallery, brought together by the Scarecrow, and the villains include Harley Quinn, Poison Ivy, Two-Face, The Penguin and the Riddler. (Talk about round up the usual suspects…)

The trailer for the game has already gotten good notices from Maxim, who call it “pure madness,” and Entertainment Weekly, who noted it “looks pretty damn epic” on their Facebook page.

Look for Arkham Asylum out in the world on June 2 on PlayStation 4, Xbox One, and PC.

The 4 things you need to know about Magic

GTA V Heists Finally to Arrive After a Wait