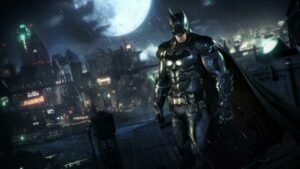 If you know Batman’s history, he doesn’t believe in killing his enemies. (Most Bat-fans know this, and still complained when Catwoman killed Bane in the last Dark Knight flick.) But now with the Batman video games, this Bat-principal might change.

Collider tells us that in the trailer for Batman: Arkham Knight that the legendary superhero may be killing some enemies, even if it’s through blowing up their vehicles. Collider also points out that in the previous Batman games he doesn’t kill his foes either. Would this really be going against the code of a legendary superhero if he does end up killing his villains, even if it’s through collateral damage?

In this game, Batman will be fighting The Scarecrow, the Penguin, Two-Face, and Harley Quinn, who have all gathered together to try and bring the Bat down for good.

Funny enough, there were morals built into the Scarface video game that kept him from killing a woman or a kid. If the player tried to go there, Tony Montana refused, much like in the movie where he refused to kill a woman and her children, and it led to his downfall.

Stephen Hawking Would Love to Play a Bond Villain

Should There Be More Tolkien Movies?