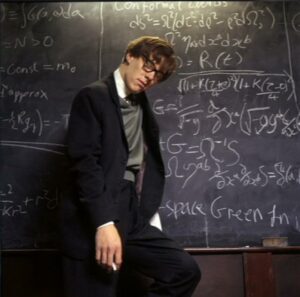 Stephen Hawking is incredibly lucky in that he’s lived long enough to see his life turned into a movie, and he was genuinely moved to tears by it. The actor who plays Hawking, Eddie Redmayne, has apparently done a remarkable job, but Hawking has other big screen ambitions as well.

As Vanity Fair and Wired tell us, Hawking would love to be a Bond villain. Hawking added, “I think the wheelchair and the computer voice would fit the part.”

This news has come as the 24th James Bond movie is about to be announced, and it will soon be official whether Christoph Waltz will be the villain or not. (We’re pretty sure he will be, and reports tell us it’s going to be Blofeld.)

While Hawking would indeed love to be in a Bond film, who wouldn’t?, it would be kind of hard to imagine it because we’d see him as…Stephen Hawking, not the role he’s supposed to be playing. Even if the storyline was Stephen Hawking going mad and trying to take over the world, it would come off as too silly to take seriously.

Vanity Fair suggested he could do a cameo as the villain’s cohort, but even that would be too wink wink, nudge nudge. Still, Hawking may have the consolation next year that Redmayne could win the Academy Award for playing him on the big screen, as The Theory of Everything is gaining strong Oscar buzz.

Batman May Be Killin’ in Arkham Knight