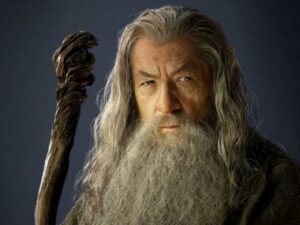 After a slow start, it looks like The Hobbit will come to a resounding conclusion with The Battle of the Five Armies. Like the Lord of the Rings series, apparently The Hobbit got better every movie, and there’s some Tolkien fans who we’re sure just can’t get enough, even though Peter Jackson has given us hours and hours of Tolkien adaptations.

Ian McKellen has told the Hollywood Reporter that he doesn’t think the last Hobbit film will be “the end of the journey,” adding, “I was told by Peter in 2001 that that was the end, that it was all over. Here we are 13 years later.”

There is the Tolkien story The Silmarillion, a sort of Middle-Earth prequel, that Jackson could adapt, but as he told the Reporter, “without the cooperation of the Tolkien estate, there can’t be more films. The Tolkien estate owns the writings of Professor Tolkien, The Hobbit and Lord of the Rings were sold [in] the late 60s…but they are the only two works of his that have been sold.”

We’re sure there could be some way to keep the franchise going, but what that be a good idea? (We also hope some Hollywood chucklehead tries to reboot the Tolkien films some day, the Jackson films should definitely stand the test of time.)

So just because there could be more Tolkien certainly doesn’t mean there should be, unless somebody can really reinvent it in a different way. (Lego is of course okay, and maybe some comedy madmen can come up with a good parody of it as well.)

Batman May Be Killin’ in Arkham Knight

Source Code Sequel in the Works