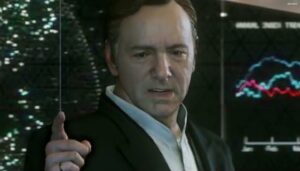 Kevin Spacey is a remarkable actor on stage and screen, and now he’s bringing his talents to the world of video games with the next installation of Call of Duty, which will be coming on November 4 through Activision.

As Rolling Stone tells us, the next installment is called Advanced Warfare, and Spacey’s playing a villain, the head of a rogue military group. In the trailer for the game, Spacey’s character says, “Democracy is not what these people need. Hell, it’s not even what they want! People don’t want freedom. They want boundaries, rules, protection.”

Spacey’s character is clearly a selling point in the game, because his ominous voice has been used in several of the game’s trailers. Another line from Spacey: “Ideas don’t determine who’s right – power determines who’s right. And I have the power, so I’m right.”

As Stone points out, Spacey isn’t the only actor who’s given his talents to Call of Duty. You may recall that Snoop Dog also gave his voice to Call of Duty: Ghosts, where he said such lines as “Homies out the joint, it’s party time,” and “Don’t stop – cap ‘em and shank ‘em!”

A key member of the Call of Duty team told Forbes that Spacey is “excited about videogames. He sees it as a new way to reach out to his fanbase,” and Spacey acted out the role in a motion capture suit.

Enjoying the Glory Days of SNL