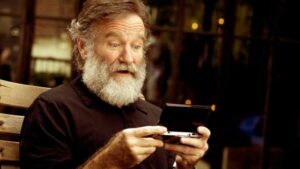 The unexpected death of Robin Williams last month was a huge punch in the stomach for many of us, myself included. For a long time, he was ubitiquous on TV and the big screen, to the point where we felt like we lost someone we knew. It was also hard to imagine Williams being gone because he seemed so full of life, and had a light in him that couldn’t be dimmed.

His legacy of work as a comedian and a dramatic actor speaks for itself, and will continue to for a long time to come, but one interesting fact about Williams that many probably didn’t know was that he loved gaming. It was something he had in common with Steven Spielberg, and he named his daughter Zelda, not after Fitzergerald’s wife, as many of us suspected, but after the game.

Williams loved The Legend of Zelda so much, he even did a commercial for it, delivering his lines straight, and clearly speaking with great joy about the game he loved so much. During one comedy routine, Williams joked about being addicted to gaming, claiming he discovered something even more frightening than cocaine: “It’s called Nintendo!” He then began a manic imitation of a video game that was quintessential Williams, and totally hilarious. (Williams was also a fan of Call of Duty, which he jokingly called “cyber cocaine” in Variety.)

The Tech Geniuses Who Interconnected Us All

The Mellow Genius of Mindcraft