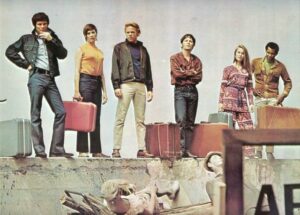 Now with Lost hitting its 10th anniversary, it’s a good time to look back at an interesting oddity in TV history, The New People. The New People was an obscure little television show that aired on ABC in the late sixties, and it quickly came and went. It would have remained completely forgotten today if it didn’t bare more than a passing resemblance to a little show called ‘Lost,’ and once ‘Lost’ became a hit, many couldn’t help but point out the similarities.

In The New People, a group of college kids crash land on an island that was equipped to be an atomic test site. There’s mannequins everywhere that are supposed to represent people in suburban areas, and there’s also plenty of food and supplies on the island as well. This being the sixties, these idealistic young folks want to build a new society much better than the one they left behind, and as the show would later go on to prove, it’s a lot easier said than done.

Although the pilot was written by Rod Serling, there are no supernatural elements to the story, at least not as far as we can tell. (Out of the entire series, only the pilot is readily available for viewing today, and you can watch it on YouTube.)

While we’re huge fans of Serling, we have to admit The New People pilot isn’t one of his best works, and this is one of his hoarier efforts. Yet as one fan who enjoyed The New People wrote on the Internet Movie Database, “The show struggled with issues we were confronting [in the sixties] at a level a young person like me could relate to. It taught skepticism of war, but also cynicism about the human condition…Kind of like Lord of the Flies with less murder and more food. And girls.”

When Aol.tv compared The New People and Lost together, the site pointed out that both shows had forty castaways on the island, “the new people” sounds similar to “the Others,” and JJ is a big Rod Serling fan. Yet Lost creator Damon Lindelof said he wished he knew about The New People before he created his castaway epic, because he could have called Charlie’s band The New People instead of Drive Shaft.

Considering The New People came and went quickly, has never been repeated, and has not been available for home viewing, we find it highly doubtful that JJ Abrams could have seen this show and ripped it off verbatim. There was also another similar island castaway story the same year as The New People called Lost Flight, starring Lloyd Bridges. It was originally the pilot for a Universal show, but was then turned into a 1969 TV movie where Bridges plays the captain of a plane that crashes on an island, and he has to mediate a power struggle between the passengers.

So ultimately, being trapped on an island isn’t a new idea, and if you want to consider The New People a late sixties precursor to Lost, it makes a very interesting pop culture oddity to go back to today.

Metallica Will Be Back in the Studio Ah….Soon…