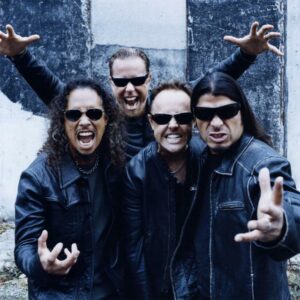 We’ve probably been writing about Metallica’s new album for about as long as…I dunno, the third Ghostbusters movie. And maybe both will be out in the world some day.

While there’s a good shot there will be new Metallica music out in the world before a third Ghostbusters flick, it has been some time since the band’s had an album out, 2007 exactly with Death Magnetic. The band certainly likes to take its sweet time when recording, and with a lot of metal fans, they’ll wait it out, as long as the album delivers.

Bassist Robert Trujillo, who usually gives updates to the press when the other guys are too busy, and he pretty much gave the same kind of vague answers you expect from a band when they’re stuck in the mud. Trujillo told Blabbermouth, “We’re gonna get back to the drawing board…we’re working, we’re writing. We’ve been writing for a couple of years.”

The band then did their 3D Imax concert film, Through the Never, which was a big disaster that got killed at the box office by Gravity. Projected date to “get back to the drawing board”? Middle of this month. Lars Ulrich said, “I’m pretty convinced that 90 percent of the record is actually written, it’s just gotta be kind of assembled between all those riffs. It’s just a matter of connecting this to this and sort of shaping it into a song.”

When Metallica finally release a new album, it will be through their own label, Blackened Recordings. The band’s nearly three decade deal with Elektra ended in YEAR, and they are now free to put out their music themselves. (They also own their master tapes.)

Cortana picks another ten out of sixteen

Lost and The New People