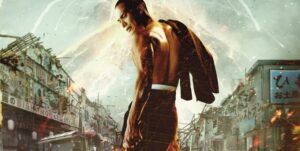 The Yakuza Apocalypse tells the story of Kageyama, a young yakuza who is ridiculed by his peers for his inability to get tattooed. His boss, the feared and allegedly invincible Kamiura, is in reality a vampire. One day, assassins from a competing foreign clan, aware of his powers, arrive giving him an ultimatum to join the syndicate. His refusal sparks a fierce battle during which he his literally torn apart, before passing away, the yakuza passes his powers onto Kageyama, prompting him to take revenge on the omni-powerful syndicate. What follows is a frenzy of martial arts fight scenes with gangsters, vampires, monsters and something that looks like zombies.

Opinions are divided between critics on how to rate this movie. The Hollywood Reporter’s David Looney calls it “a bloody silly bore”, whereas The Telegraph’s Robbie Collin says “Takashi Miike’s martial arts extravaganza is foolish, transgressive, and just about the best fun you can have in a cinema”.

If anyone is looking for deep character studies, then they are looking in the wrong place. The fight scenes are between gangsters, vampires and a guy in a green frog suit (!?), not something to be taken seriously. Take a look at the official red band trailer below to know what to expect, you might then even enjoy it.

Yakuza Apocalypse is scheduled for 9 October. 2015.