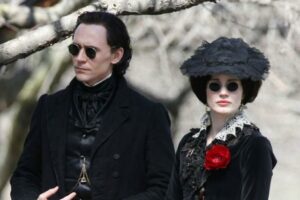 As long time TG readers know, we’re big fans of Guillermo Del Toro here, and we’re excited by the buzz that Crimson Peak is one of the best horror films in years, at least as far as Stephen King’s concerned.

Del Toro of course came in for Comic Con last weekend, where he covered a wide variety of potential projects, including a Hellboy 3, which may not come to pass, unfortunately. As the Daily Beast reports, Del Toro said, “The hard fact is that the movie’s going to need about $120 million and there’s nobody knocking down our doors to give it to us.”

Seriously? A second Pacific Rim’s in the works, but he can’t get Hellboy 3 going? “It’s a little beyond Kickstarter,” he added. He also joked they had to get the movie going quick before Ron Perlman has to do the movie “from a Barcalounger.”

As far as Crimson Peak is concerned, Del Toro added, “You don’t want the right movie with the wrong rating. I gave up about 30 percent of my salary and my entire back-end in order to keep Crimson Peak R-rated…A PG-13 Crimson Peak should not exist.” And we thank Del Toro for not wimping out, which makes us even more excited about Crimson Peak coming on October 16.

The New iPod, Apple Should be Applauded for Fixing a Stupid Mistake