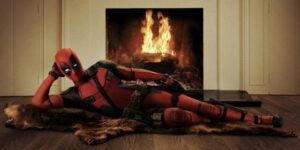 At this weekend’s Comic-Con, Deadpool was the big winner for many. The Hollywood Reporter felt it was the best received trailer at the Con, and the Deadpool experience even made Ryan Reynolds cry.

Reynolds should be a major comeback kid next year with the release of Deadpool, and he told the Reporter when he first saw the Deadpool suit, there were “tears coming down [my] cheeks. It felt so good.”

The suit had to come together fast, “a lot of work with very little time,” he continued. “Fox gave us the green light and we had to be on camera in twelve weeks. When we finally saw that suit, director Tim Miller and I wept.”

In other Comic-Con news, oddly enough, Deadpool was not the most tweeted about movie this weekend, it was Mockingjay Part 2, followed by Batman v Superman and Star Wars, but we think Deadpool, like Guardians of the Galaxy, should sneak in under the radar and be a big hit next year, if the early buzz is buzzing correctly.

As the Reporter noted, from what they’ve seen of Deadpool already, “it looks like the first movie that talks to the fan audience in their own language. The new Fox movie recognized its audience.”

The Last Starfighter Reboot May Happen on TV