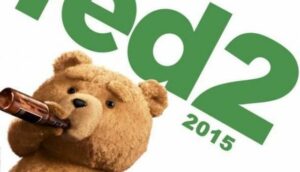 Ted was a huge comedy smash when it came out in 2012, and a sequel was inevitable. So how does part 2, which opens on Friday, measure up?

As we’ve seen from the trailers, it looks like Seth MacFarlane is going for a more Frank Capra kind of movie, like Ted Goes to Washington, and Variety calls the film “likeable, but overlong.” The movie also apparently works on the intellectual humor level, as well as the potty humor level as well.

The Hollywood Reporter also said Ted 2 has “plenty of laughs despite too much plot…Although the original’s over-the-top vulgarity has been dialed down a notch, Ted 2 still offers plenty of R-rated laughs that will sure prove a challenge to network censors when the film is aired on television.”

Meanwhile, Hifix says Ted 2 suffers from “sequelitis,” and overreaches. The Wrap also wrote that the movie’s “bad-taste humor plays it safe (and sexist)…,” and Entertainment Weekly wrote that too many jokes in the film “are just loutish and lazy and don’t land.”

Terminator Genisys Reviews Are In