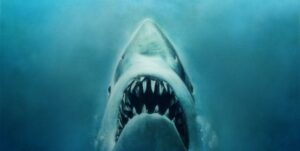 It’s yet another anniversary that makes us feel old, Jaws is turning forty on June 20, and it was a movie that changed cinema forever. While many will gripe that it created the “blockbuster syndrome,” because it made $100 million faster than any movie in history, people forget that Jaws is one of the best movies of the seventies, and no other shark movie has topped it. (Spielberg wanted Jaws to be the ultimate shark film, and he absolutely achieved his goal.)

It’s odd that Jaws’s anniversary really hasn’t been remarked as much as it should be, with the exception of the big Jaws fan get-together on Martha’s Vineyard years back, but now Jaws is headed back to theaters for a 500-date run. While this is a limited run by today’s standards, it’s easy to forget that Jaws opened in just over four hundred theaters, which was a big release back in ’75.

As a child of the ‘70’s, I can recall what a phenomenon of the decade Jaws was, and how it terrified so many people, but you had to see it because the movie was just too good to ignore. My first time seeing it I had to watch a lot of it peeking through my fingers, but I couldn’t stop watching because indeed the movie was too good to turn away.

So again, while many can be angry at Jaws and Star Wars for making Hollywood obsessed with making hundreds of millions (now billions) at the box office, Jaws and Star Wars are still remembered and loved because we remember the incredible impact they had on us growing up. With Jaws, Spielberg did indeed craft the ultimate shark movie, and he absolutely broke the mold with it. We thank him for scaring and thrilling us so well.