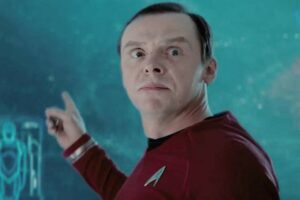 Star Trek 3 hasn’t had an easy road. Paramount wants a new Star Trek movie in theaters in time for the franchise’s 50th anniversary in 2016, but trying to nail down a script or a director has been tough.

Simon Pegg is working on the script for Trek 3, taking over after Roberto Orci (Transformers) left the project. Orci was also going to direct, but has since be replaced by Fast and Furious director Justin Lin.

Pegg told The Guardian and Collider that the Star Trek script needed to be “more inclusive” for Paramount. In other words, it couldn’t just be for Trekkies, and one thing I enjoyed about the best Trek films is you can enjoy them whether you’re a Trekkie or not. And as Pegg says, the studio was worried the script for the third Trek “might have been a little bit too Star Trek-y. Avengers made $1.5 billion. Star Trek Into Darkness made half a billion, which is still brilliant. But it means that, according to the studio, there’s still $1 billion worth of box office that didn’t go and see Star Trek. And they want to know why.”

BTW, the title for the third Star Trek is reportedly Star Trek Beyond.

U2 and the Amazing Magical Future of Concerts