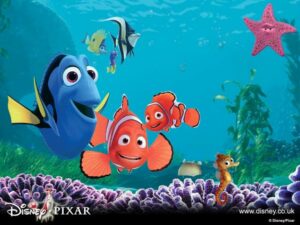 We at TG love the Pixar movies, and it seemed that every one they kept getting better and better. Then that stopped, and you got the impression they were slipping and taking the easy way out, making movies specifically to sell toys like Cars 2.

Now apparently Pixar is back, big time, with Inside Out, and they just revelead images and footage from their upcoming slate, The Good Dinosaur, Finding Dory, Toy Story 4, Zootopia and Moana.

Variety and Collider report that The Good Dinosaur looked like a cross between Tarzan and Lilo & Stitch. With Finding Dory, the sequel takes place six months after the first movie, where the famous fish with ADD will be looking for her family. (Diane Keaton and Eugene Levy will voice her parents.)

Nothing was revealed for Toy Story 4, it’s not due until June 16, 2017, and the movie is still in what John Lasseter called “the early stages of the film, but it’s shaping up nicely.” And both Zootopia and Moana could make interesting departures for the company. Zootopia looks a little more like a traditional animation movie about a fox on the run for a crime he didn’t commit, and Moana is about a navigator setting sail for a promised land island, guided by the god Maui.

A lot of this sounds very promising, and we’re glad that Pixar is finally coming up with a better looking slate than a bunch of tired sequels and retreads.

Lando Calrissian May Return to the Star Wars Universe One Day

Can Star Trek Be Too Star Treky?