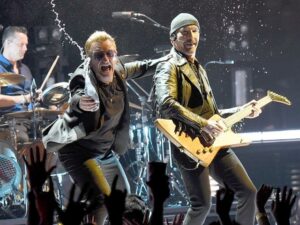 I was the guest of EMC for the U2 concert in SAP Center, used to be the HP Pavilion, in San Jose earlier this week and it was AMAZING!  I haven’t been to a music concert since I was in my 20s and sadly the last one I attended was Barry Manilow (it was a gift for helping one of my neighbors move).  (I did attend KISS, The Who, Jethro Tull, and one massive concert I don’t now, or then, remember very well).  Things have changed a great deal since then, sound quality was up, video technology has clearly advanced, and the staging is far more spectacular.  U2 is an interesting band as well as they should be well beyond their due date yet their music and band remain relevant and a power in the music industry partially, I think, because they’ve embraced technology.  I had an amazing time, if you ever get the chance to see U2 live they put on great show!

However in watching and listening to the concert and thinking back to the rock concerts I’d attended as a much younger adult I think I can make some predictions about where this is all likely going.

No my memory of other concerts was that you needed to be near the stage to get a good experience and then you were lucky if you didn’t lose about 10% of your hearing because the sound was so loud.  The further you got the more the sound bounce from the walls created an ugly hollow reverberation effect.  They now (at least U2 does) put the speakers on the ceiling and there seems to be some kind of active or passive noise cancellation going on because there is very little echo.  However I noticed the sound was muddy and the highs largely got lost in the process.

Don’t get me wrong the music was still amazing but if you had a good stereo in your car you’d likely get far more sound resolution.

Video capability has improved massively as well.  What is interesting is like a lot of cutting age firms (read Google and Facebook) U2 apparently uses generic workstation class components tied to NVIDIA graphics cards but a branded EMC VNXe3200 storage solution all in a custom made portable rack.  This allows them to create graphics during rehearsal, have a reliable place to store the result, and have a really robust reliable solution to playing graphics on the stage.   While the storage system was a state of the art flash based system it looked like the graphics solution was one or two generations back.  This may have been because the platform they were using was tied tightly to the older cards.

I noticed another problem, in a 360 degree environment like the SAP Center the videos were really only visible to those on the sides because the massive displays had been placed perpendicular to the band.  I could see why, if you put he displays in line with the band they’d both conflict with the other displays and effectively block the view of the band.

This got me thinking about what could be done with current and coming technology to make this much better.

Synced active noise cancelling headphones seems to be an obvious play here.  It seems obvious in a day and age where headsets, earbuds, and noise cancelling headphones are common why not spec a technology that would result in better enjoyment. Add a microphone and a peer to peer capability and people could chat with each other better during the concert without having  (to scream (which gets old really quickly).  The issue is the speed of sound really isn’t that fast and either you’d have to stop using speakers (unlikely) or find a way to sync the sound you hear in the headphones while blocking the external sounds.  Given active noise cancellation has a microphone to create a counter sound wave this information could also be used to determine the sound latency and do the external speaker sound block and sync the internal headphone sound to match what is coming from the stage.  The easiest way would likely be using some kind of an internal buffer.  The end result would be you’d hear amazing music range, still feel the bone jarring bass, and have a far better social experience without disturbing the folks around you as much.   Granted you’d have to buy the headphones but given how much these tickets cost that would likely be a small price to pay for what could be a vastly better experience.  Oh and you could use MU-MIMO Wi-Fi connected through something like a Ruckus router to distribute the sound.

What about the video?  Well I was initially thinking Oculus Rift but that would be better if you were viewing this remotely.  If you are there you want to blend the live band with the video and Microsoft’s Hololens concept would work far better for this.  Initially you could simply place the high resolution video screen anyplace you wanted but now imagine if the band had control.  It could wrap the lead singer with virtual pyrotechnics, change their clothing while they were playing on stage, or add anything from angel’s wings to devils horns.   And you could do amazing things like have a full sized photorealistic dragon or Phoenix fly into the stadium circle, land or crash into the stage in a massive fiery explosion.  You could even have dead entertainers walk on stage and play with the band (granted this likely would require special rights).

Once you can control fully what the audience sees and hears the only limitations are the band’s imagination and Hololens could take us there (and it helps a lot that it is self-contained) though you’d like have supply airline like power to the seats.

I expect that in 5 to 10 years concerts will go through a massive change where artists craft an experience that is unmatched and eventually where some fans can select preferences and have a personalized or elite experience (like a virtual personal chat during intermission or before the show with one of the artists).  Once we learn to fully control what you see, hear and eventually feel concerts like this will become considerably more epic than they currently are, in fact they could place you in the middle of historic or imagined virtual epic events.  I truly enjoyed the U2 concert but, it reminded me we haven’t seen anything yet.

Can Star Trek Be Too Star Treky?

Chromebook sales on the rise