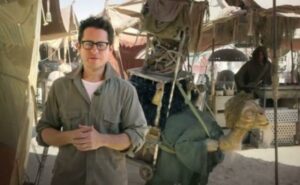 A screenwriter I admire once said that movies these days are usually about ten to twenty minutes too long, and indeed, many directors have been infected with epicitis, thinking that every story needs to be at least two hours and change, if not longer.

There’s of course a temptation to make Star Wars The Force Awakens longer than two hours, because audiences can’t get enough of a good thing. After all, you didn’t want the first Star Wars to end, but it came in at a little over two hours, and left you wanting more.

Lawrence Kasdan, who wrote Empire and Jedi, as well as Raiders and many other great movies, also worked on the script for Awakens. As he told Collider, “One of the things that we always refocus on from the get-go was that it not be one of these very long, bloated blockbusters. A lot of very entertaining movies lately are too long. In the last twenty minutes, you think, why isn’t this over? We were really aiming to have it be – when it’s over you’ll say, ‘I wish there’s more.’ Or, ‘Wait, is it over?’”

If The Force Awakens really leaves us craving more at the end, we’re indeed looking forward to seeing it on December 18.

I’m giving away a multi-million dollar idea for free

Episode One Came Out Today, May 19