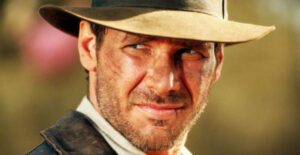 So Vanity Fair just did a big pimpin’ cover story on Star Wars for Star Wars day this week, and we’ll be diving into it soon for news on The Force Awakens. One of the big stories from the article is that there is indeed going to be a fifth Indiana Jones movie as well, just not any time soon.

As Fair tells us, when Disney bought Lucasfilm, the deal also included Jones, as well as two other Lucas creations, Radioland Murders and Willow. Kathleen Kennedy, who is the president of Lucasfilm, confirmed that there will be another Indy film some day, just clearly not any time soon.

“[It] will one day be made inside this company,” she said. “When it will happen, I’m not quite sure. We haven’t started working on a script yet, but we are talking about it.” And as the chairman of Disney told Variety, “We don’t have a story. We need a story.” (Although this certainly didn’t stop Kingdom of the Crystal Skull from getting made…)

Even though Harrison Ford has wanted to come back, and doing The Force Awakens was reportedly his bargaining chip to do another Indy flick, he apparently won’t be Indy again, but maybe he can take up the older mantle, like Sean Connery playing his dad in The Last Crusade.

While we’re glad Star Wars has a chance at redemption, we’re not so sure about Indy, but maybe if JJ Abrams really can bring Star Wars back, maybe he could help redeem Indy’s legacy as well. He hasn’t been bandied about as a potential director, but we wouldn’t be surprised if his name was on the short list of helmers for it.