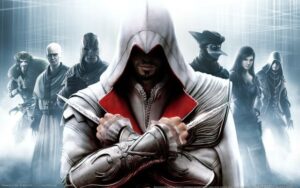 On the eve of the release of the new Mad Max movie, Tom Hardy was asked about Splinter Cell, which he’s looking forward to doing, but it’s still in the script phase. We’re still hopeful that video game movies could become the hot new genre if the right one hits, and now Assassin’s Creed is getting ready to roll.

As Uproxx and ComingSoon.net tell us, the movie will shoot this Septmeber with Michael Fassbender in the lead. As you also know, Fassbender is playing Steve Jobs in the new biopic of the tech giant that’s hitting theaters this fall.

While it’s taken some time for Assassin’s Creed to come together, Fassbinder said, “Starting to develop scripts and work on them, they take time. It just takes time to get a good story together and we really want to do it right. It’s exciting. It’s going to start this year, we’ll be filming in September.”

The one movie we think could be the video game movie that breaks open the market could be Warcraft, which has now been moved up to next summer. In the meantime, we’ll be watching the development of Assassin’s Creed and Splinter Cell closely, and hope it will finally erase the bad taste of Super Mario Brothers once and for all.

Why No Loki in Avengers Age of Ultron