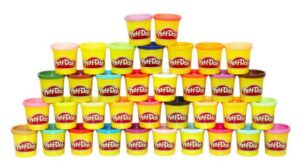 The Lego Movie was a huge hit, and there will certainly be more Lego movies to come in the rest of the decade. Like the saying goes, Hollywood always tries to jump on the ship they just missed, and now comes reports there may be a Play-Doh movie.

The site Geek tells us that a Play-Doh movie may be director Paul Feig’s follow up to the all female Ghostbusters, which is coming next year. This deal was put together by 20th Century Fox and Hasbro, who have had a bad run of luck at the movies with Battleship as well as…well actually, that’s all it took to end Hasbro at the movies.

Again, as many are guessing already, this is probably Fox’s way of trying to steal Lego’s thunder, and maybe they can get this movie out into the world by the time the next big Lego film is in theaters.

While many of you reading this are probably already rolling your eyes, and we can’t blame you, we think a Play-Doh movie could go in a lot of directions. It could be a great family film, a comedy with subversive humor for young adults, or a complete disaster. The real question that’s on my mind, will Mr. Bill make a cameo?