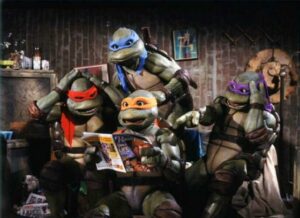 Behind every huge success were tons of doubters who wouldn’t invest a minute of time, or a dime, in it. Back to the Future was rejected over forty times before it was finally made by Universal and was a huge success, and apparently Teenage Mutant Ninja Turtles had a tough time getting off the ground as well.

The comics were a major underground sensation that had a strong fanbase, but comic movies weren’t taken seriously, and kung fu fighting Turtles were a tough sell after the disaster of Howard the Duck.

On the 25th anniversary of the movie’s release (it came out on March 30, 1990), the Hollywood Reporter tells it went around in 1988, and it finally got a go from the Chinese company Golden Harvest, who made a lot of chop socky movies, because the attitude was they could make the movie cheap overseas.

Then video director Steve Barron (Billie Jean), and he thought of doing it with a similar vibe to Ghostbusters and Tim Burton’s Batman. He also came up with the idea of making a hybrid of the comics and the animated series. They were also lucky enough to bring aboard Jim Henson to do the suits and the puppets.

Against all doubts and all odds, the Ninja Turtles movie was a huge success, making $135 million, a huge take for the time, and it made the studio who released it, New Line Cinema, major players in the biz. Considering the fact that the movie, while much more kid friendly than the comics, is still revered, shows that the powers that be who brought it to the silver screen had the right idea all along.