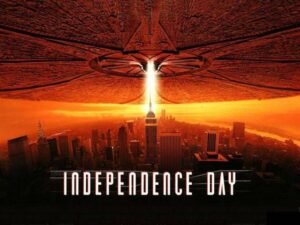 Independence Day was like the disaster films of the ‘70’s, where a wide variety of people are thrown together in a major life-threatening situation, and they have to fight their way out of it. Now the next Independence Day will have a more diverse group of people than ever with a gay couple.

Roland Emmerich, who wrote and directed ID4 with Dean Devlin, is gay, and he also recently helmed a film about the Stonewall riots. He confirmed to the Hollywood Reporter that the next ID4 will indeed have a gay couple, but “we don’t make a big deal out of it. You start small and then you get bigger and bigger and bigger, and one day you have a gay character as the lead and nobody will wonder at it no more. But we’re not there yet.”

These days, we don’t see this kind of thing raising any hackles, after all Zachary Quinto, the new Spock, came out, and that barely made a ripple anywhere. Sci-fi like Star Trek and Star Wars always celebrated diversity, and showed the world there’s a future for everybody.

As it turns out, the disaster film format is the perfect way to fit in gay characters and have them potentially steal the show. As Emmerich continued, “When you go to a studio and say it’s [the lead] character and it’s a $150 or $160 million film – they will not allow it. But when you have five characters, they allow [one of them to be gay] because they’re super-smart, you know?”

Why Didn’t Google Glass Take Off?