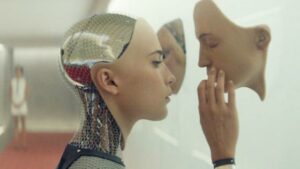 Alex Garland is definitely a cool screenwriter / director  in the world of geekdom. He’s the guy who wrote 28 Days Later, as well as Dredd, and he also wrote the big screen version of Halo that never came to pass at Universal. (Definitely gotta give him props for trying on that one.)

Garland now has a movie about robots coming up, Ex Machina, and it’s getting very good reviews so far. Vanity Fair calls it “an artificial intelligence movie with some brains,” and Cinema Blend even went so far as to rave that it’s “an early frontrunner for 2015’s best film.” Already?

Cinema Blend writes, “Garland sets up a brilliant mystery that is utterly captivating at every turn. It’s a mind f*ck of the highest order – and it’s an utter thrill to get lost in the puzzle.”

Ex Machina is coming on April 10, and we’re very curious to see if it will indeed live up to these reviews, which coming from the SXSW Festival are indeed very strong so far.