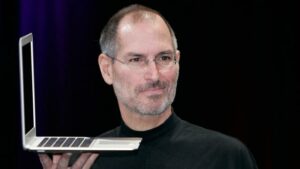 Right now, the big, pimpin’ Steve Jobs biopic is in production for a October 9 release, and we’re hoping this one, starring Michael Fassbinder in the title role, will bring justice to the guy. Which is not to say we hope it’s a hagiography.

Jobs was definitely a very complicated personality, and many would probably describe him as a piece of work. And now a new documentary, Steve Jobs: Man in the Machine, has been denounced by one Apple executive as “inaccurate and mean-spirited.”

The documentary was directed by Alex Gibney, the same man who gave us, Going Clear, the documentary about Scientology. As The Guardian reports, Eddy Cue, the head of internet software and services for Apple, tweeted, “Very disappointed…An inaccurate and mean spirited view of my friend. It’s not a reflection of the Steve I knew.”

Business Insider also reported that the documentary is a “blistering takedown” that is “deeply unflattering.” The film has been picked up by Magnolia Pictures for domestic distribution.