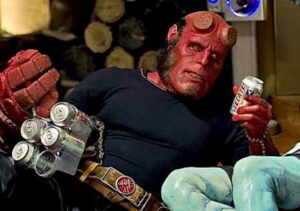 Some time back we reported on Game of Thrones beer, which we guess didn’t take off because we haven’t heard much about it since. Have you heard anyone order it at your local pub lately?

Still, Hellboy will now have his own beer, and as Uproxx tells us, it’s right in time for the character’s 21st birthday this year. This beer will come out through the company Rogue Ales, and it will be a red ale called The Right Hand of Doom. Gotta love that name, imagine ordering that at your local bar or pub.

In a statement, Dark Horse Comics, “Since our beloved Big Red is finally of legal drinking age, what better way to celebrate than with a Rogue Ales beer made in his honor.”

Hellboy creator Mike Mignola said in a statement that when the first Hellboy comic appeared twenty-one years ago, he never imagined there would be a Hellboy beer. “But I really can’t imagine a better time for Rogue to introduce the Right Hand of Doom beer. If Hellboy was real, I guess he’d finally be able to buy me a beer.” Hey Hellboy, make that a round for the rest of us too.

Back to the Future DeLorean iPhone Case is Coming

Is Rock Band Coming Back?