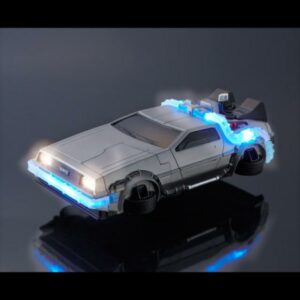 Okay, we don’t have the hoverboard yet, flying cars are still a ways a way as well, but what about a Back to the Future iPhone case?

Slash Film tells us that the DeLorean iPhone case is being made by the Japanese toy company Bandai, and it’s not just any old slipcase, it actually has working lights that flash when a call comes in.

According to this report, the Back to the Future case will be ready in June and should set you back about fifty bucks. This is clearly another cool treat to celebrate the 30th anniversary of the first movie, as well as the fact that we’re now in the year of Back to the Future 2, 2015.

There’s more cool stuff in the works, like screenings of the first film with a live orchestra, a BTTF musical, as well as special edition Nike self-tying shoes. Anniversary or not, it’s always a good time to celebrate Back to the Future and enjoy. (Amazing to think it’s 30 years old now and we’re still digging it after all this time.)

Can Another Pirates Flick Save Johnny Depp